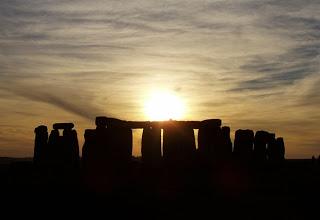 from discovery: Stonehenge may have been a place for sun worship long before the iconic stones were erected more than 5,000 years ago, according to archaeologists who are carrying out the biggest-ever virtual excavation. Using non-invasive technologies such as ground-penetrating radar and geophysical imaging, a team from the University of Birmingham’s IBM Visual and Spatial Technology Centre (VISTA) and the Ludwig Boltzmann Institute for Archaeological Prospection and Virtual Archaeology in Vienna, discovered evidence of two huge pits positioned on a celestial alignment at Stonehenge. Measuring more than 16 feet across and at least 3 feet deep, the pits lie within the Cursus, a large enclosure north of Stonehenge which pre-dates the prehistoric monument by up to 500 years. “This is the first time we have seen anything quite like this at Stonehenge,” said project leader Vince Gaffney, an archaeologist from the University of Birmingham.