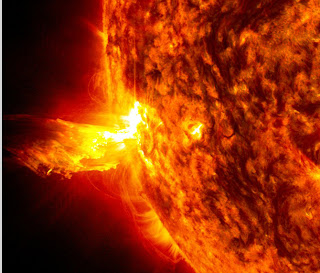 The Extinction Protocol: 2012 and Beyond reports recent Coronal Mass Ejection: "On June 20, 2013, at 11:24 p.m., the sun erupted with an Earth-directed coronal mass ejection or CME, a solar phenomenon that can send billions of tons of particles into space that can reach Earth one to three days later." The brief article reports fast rate of speed, ejection traveling at 1350 miles per second:  "... based on observations from NASA’s Solar Terrestrial Relations Observatory and ESA/NASA’s Solar and Heliospheric Observatory show that the CME left the sun at speeds of around 1350 miles per second, which is a fast speed for CMEs. Earth-directed CMEs can cause a space weather phenomenon called a geomagnetic storm, which occurs when they funnel energy into Earth’s magnetic envelope, the magnetosphere, for an extended period of time. The CME’s magnetic fields peel back the outermost layers of Earth’s fields changing their very shape. Magnetic storms can degrade communication signals and cause unexpected electrical surges in power grids. They also can cause aurora. Storms are rare during solar minimum, but as the sun’s activity ramps up every 11 years toward solar maximum – currently expected in late 2013 — large storms occur several times per year." Spaceweather.com reports: " For the second day in
a row, a fast stream of solar wind is blowing around
Earth. NOAA forecasters estimate a 30% chance of
polar geomagnetic storms on June 23rd in response
to the buffeting."