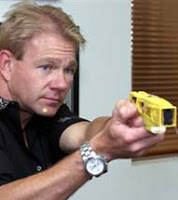 from raw story: Outside a Maryland high school gym last Wednesday, sophomore Brandon Bennett got into a small altercation with a fellow student. It was after a basketball game and tempers were high, but the the two were separated by officials and students without much problem. Only then did things get really violent. According to Julius Bennett, the student's father, Deputy Anthony Lenzi fired a Taser at his son after being told twice by a senior officer it was not necessary... This video is from CNN.com, broadcast February 19, 2008.

from az capitol times: Changes approved late last year to the state’s 9/11 Memorial will become a reality soon, as construction on the steel-and-concrete structure will begin soon. “We gave them notice to proceed, so they should be beginning any day now,” Arizona Department of Administration spokesman Alan Ecker said... The memorial came under fire for being unpatriotic and lacking historical context almost immediately after it was unveiled on the fifth anniversary of the terrorist attacks in New York and Washington, D.C.

fema misspent money from toxic trailer sales
from ap: The Federal Emergency Management Agency misspent millions of dollars it received from selling used travel trailers, government investigators have found. Instead of buying more trailers - as allowed under the law - FEMA used more than $13 million toward fully loaded sport utility vehicles, travel expenses and purchase card accounts, according to a draft report by the Homeland Security Department's inspector general obtained by The Associated Press. The report is to be released Friday. 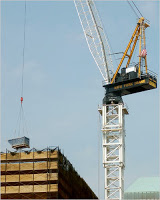 from new york times: Federal safety regulators have accused the contractors who were taking down the former Deutsche Bank tower in the summer of indifference or intentional disregard for dangerous conditions that led to a fatal fire there, and of a host of other serious safety violations, officials said on Tuesday. The regulators cited the project’s general contractor, Bovis Lend Lease, an international construction management company, and its former subcontractor, the John Galt Corporation, for 44 safety violations, and proposed fining them nearly half a million dollars.

from truthnews: The Federalist Society and Opus Dei controlled Supreme Court has bounced the ACLU’s challenge of the Bush - that is, neocon handled sock puppet - warrantless and thus Fourth Amendment busting snoop program. “The ACLU wanted the court to allow a lawsuit by the group and individuals over the warrantless wiretapping program. An appeals court dismissed the suit because the plaintiffs cannot prove their communications have been monitored,” reports the Associated Press. Of course, since the “government has refused to turn over information about the closely guarded program that could reveal who has been under surveillance,” proving it in court would be impossible. It’s a catch-22 with a cherry on top. In other words, it never happened. Nobody was snooped. Nothing to see here. Now please move along.

soldiers sue over being nerve gas guinea pigs
from herald sun: A group of former Israeli army recruits are suing the government for compensation after it allegedly made them unwitting guinea pigs by testing them for nerve gas antidotes, a newspaper reported. The army claims the testing was carried out by volunteers. "We were laboratory rats for the army," Avi Yogev, 55, referring to a case dating back to 1971, told Yediot Aharonot newspaper. "We were guinea pigs for Tsahal (the army) and today we are paying the price... They told us we were participating in a secret project," Mr Yogev said, explaining that the soldiers were told during training that they had to participate or would not be allowed to serve in a combat unit.

how the spooks took over the news

from the independent: In his controversial new book (Flat Earth News), Nick Davies argues that shadowy intelligence agencies are pumping out black propaganda to manipulate public opinion – and that the media simply swallow it wholesale.