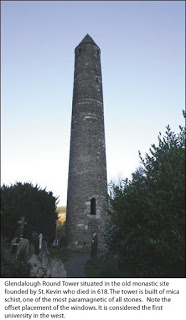 The Paramagnetic Round Towers and Landscape Star Map of Ireland

from whale.to: Published in 1998: 'Some years before, Callahan had bought Professor Barrow's Irish Heritage pamphlet on round towers which included a fine map of the still-standing towers.

'I was lying on a couch looking at the map. There was something very familiar about it - apart from it being a map of Ireland! After about five or ten minutes it suddenly flashed into my mind - insight I believe it is called - exactly why the map appeared so familiar. The towers formed a star map of the northern night sky. I have used that sky map dozens and dozens of times hiking around in the deserts of the world. It is gouged like a carved woodblock into my brain.'

Callahan discovered that radio signals in the far infrared spectrum are a crucial element in insect behavior. He also knew that radio signals could affect human behavior and well-being. During a particularly severe winter storm in Ireland in 1944 the young GI was on night duty alone at the station when both the primary and back-up transmitters failed. With ten aircraft out over the Atlantic dependent on his signal to get back, it was a fraught moment. 'I couldn't make any sense of it. Both machines were working fine, but there was no signal transmitting. Callahan shakes his head at the memory. 'But then I remembered what an old Arctic radio man once told me about how ice-coated insulators could earth the signal. So I climbed up the antennae poles and whacked the ice off with a broom stick. It did the trick. But by the time I'd finished I could hardly stand up; the radio energy had made me drunk."