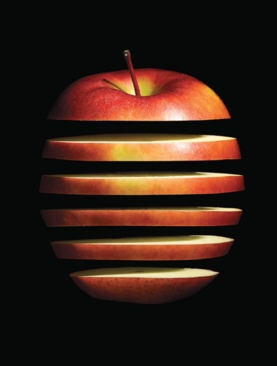 The Secret Spiritual History of Calculus from scientificamerican.com: In the 17th century Italian mathematician Bonaventura Cavalieri proposed that every plane is composed of an infinite number of lines and every solid of an infinite number of planes. One could use these “indivisibles,” he said, to calculate length, area and volume—an important step on the way to modern integral calculus. Swiss mathematician Paul Guldin, Cavalieri's contemporary, vehemently disagreed, criticizing indivisibles as illogical. But the men argued for more than purely mathematical reasons. They were members of two religious orders with similar spellings but very different philosophies: Guldin was a Jesuit and Cavalieri a Jesuat. The former believed in using mathematics to impose a rigid logical structure on a chaotic universe, whereas the latter was more interested in following his intuitions to understand the world in all its complexity.

Paul Guldin's critique of Bonaventura Cavalieri's indivisibles is contained in the fourth book of his De Centro Gravitatis (also called Centrobaryca), published in 1641. Cavalieri's proofs, Guldin argued, were not constructive proofs, of the kind that classical mathematicians would approve of. This was undoubtedly true: in the conventional Euclidean approach, geometric figures are constructed step-by-step, from the simple to the complex, with the aid of only a straight edge and a compass, for the construction of lines and circles, respectively. Every step in a proof must involve such a construction, followed by a deduction of the logical implications for the resulting figure.

Cavalieri, however, proceeded the other way around: he began with ready-made geometric figures such as parabolas, spirals, and so on, and then divided them up into an infinite number of parts. Such a procedure might be called “deconstruction” rather than “construction,” and its purpose was not to erect a coherent geometric figure but to decipher the inner structure of an existing one.

Guldin next went after the foundation of Cavalieri's method: the notion that a plane is composed of an infinitude of lines or a solid of an infinitude of planes. The entire idea, Guldin insisted, was nonsense: “No geometer will grant him that the surface is, and could in geometrical language be called, ‘all the lines of such a figure.’”

In other words, because lines have no width, no number of them placed side by side would cover even the smallest plane. Cavalieri's attempt to calculate the area of a plane from the dimensions of “all its lines” was therefore absurd. This then led Guldin to his final point: Cavalieri's method was based on establishing a ratio between all the lines of one figure and all the lines of another. But, Guldin maintained, both sets of lines are infinite, and the ratio of one infinity to another is meaningless. No matter how many times one might multiply an infinite number of indivisibles, they would never exceed a different infinite set of indivisibles.

When taken as a whole, Guldin's critique of Cavalieri's method embodied the core principles of Jesuit mathematics. Christopher Clavius, the founder of the Jesuit mathematical tradition, and his descendants in the order believed that mathematics must proceed systematically and deductively, from simple postulates to ever more complex theorems, describing universal relations between figures. Constructive proofs were the embodiment of precisely this ideal. The approach produced a rigorous and hierarchical mathematical logic, which, for the Jesuits, was the main reason why the field should be studied at all: it demonstrated how abstract principles, through systematic deduction, constructed a fixed and rational world whose truths were universal and unchallengeable. In this, Clavius pointed out, Euclidean geometry came closer to the Jesuit ideal of certainty, hierarchy and order than any other science. It follows that Guldin's insistence on constructive proofs was not a matter of pedantry or narrow-mindedness, as Cavalieri and his friends thought, but an expression of the deeply held convictions of his order.

The same was true of Guldin's criticism of the division of planes and solids into “all the lines” and “all the planes.” Not only must mathematics be hierarchical and constructive, but it must also be perfectly rational and free of contradiction. Yet Cavalieri's indivisibles, as Guldin pointed out, were incoherent at their very core because the notion that the continuum was composed of indivisibles simply did not stand the test of reason. “Things that do not exist, nor could they exist, cannot be compared,” he thundered, and it is therefore no wonder that they lead to paradoxes and contradiction and, ultimately, to error.”

To the Jesuits, such mathematics was far worse than no mathematics at all. The purpose of mathematics, after all, was to bring proper order and stability to the world, whereas the method of indivisibles brought only confusion and chaos. If this flawed system was accepted, then mathematics could no longer be the basis of an eternal rational order. The Jesuit dream, of a strict universal hierarchy as unchallengeable as the truths of geometry, would be doomed.

In his writings, Guldin did not explain the deeper philosophical reasons for his rejection of indivisibles, nor did Jesuit mathematicians Mario Bettini and Andrea Tacquet, who also attacked Cavalieri's method. At one point, Guldin came close to admitting that there were greater issues at stake than the strictly mathematical ones, writing cryptically, “I do not think that the method [of indivisibles] should be rejected for reasons that must be suppressed by never inopportune silence.” But he gave no explanation of what those “reasons that must be suppressed” could be. As mathematicians, the three had the job of attacking the indivisibles on mathematical, not philosophical or religious, grounds. Their mathematical credibility would only suffer if they announced that they were motivated by theological or philosophical considerations.

Those involved in the fight over indivisibles knew, of course, what was truly at stake, as Stefano degli Angeli, a Jesuat mathematician hinted when he wrote facetiously that he did not know “what spirit” moved the Jesuit mathematicians. With very few exceptions, the debate remained mathematical, a controversy between highly trained professionals over which procedures could be accepted in mathematics.

When Cavalieri first encountered Guldin's criticism in 1642, he immediately began work on a detailed refutation. Initially he intended to respond in the form of a dialogue between friends, of the type favored by his mentor, Galileo Galilei. But when he showed a short draft to Giannantonio Rocca, a friend and fellow mathematician, Rocca counseled against it. It was safer, Rocca warned, to stay away from the inflammatory dialogue format, with its witticisms and one-upmanship, which were likely to enrage powerful opponents. Much better, Rocca advised, to write a straightforward response to Guldin's charges, focusing on strictly mathematical issues and refraining from Galilean provocations. What Rocca left unsaid was that Cavalieri, in all his writings, showed not a trace of Galileo's genius as a writer, nor of his ability to present complex issues in a witty and entertaining manner. It is probably for the best that Cavalieri took his friend's advice, sparing us a “dialogue” in his signature ponderous and near indecipherable prose. Instead Cavalieri's response to Guldin was included as the third “Exercise” of his last book on indivisibles, Exercitationes Geometricae Sex, published in 1647, and was entitled, plainly enough, “In Guldinum” (“Against Guldin”).

Cavalieri did not appear overly troubled by Guldin's critique. He denies that he posited that the continuum is composed of an infinite number of indivisible parts, arguing that his method did not depend on this assumption. If one believed that the continuum is composed of indivisibles, then, yes, “all the lines” together do indeed add up to a surface and “all the planes” to a volume, but if one did not accept that the lines compose a surface, then there is undoubtedly something there—in addition to the lines—that makes up the surface and something in addition to the planes that makes up the volume. None of this, he contended, had any bearing on the method of indivisibles, which compares all the lines or all the planes of one figure with those of another, regardless of whether they actually compose the figure.

Cavalieri's argument here may have been technically acceptable, but it was also disingenuous. Anyone reading his 1635 book Geometria Indivisibilibus or Exercitationes could have no doubt that they were based on the fundamental intuition that the continuum is composed of indivisibles. Guldin was perfectly correct to hold Cavalieri to account for his views on the continuum, and the Jesuat's defense seems like a rather thin excuse.

Cavalieri's response to Guldin's insistence that “an infinite has no proportion or ratio to another infinite” was hardly more persuasive. He distinguished between two types of infinity, claiming that “absolute infinity” indeed has no ratio to another “absolute infinity,” but all the lines and all the planes have not an absolute but a “relative infinity.” This type of infinity, he then argued, can and does have a ratio to another relative infinity. As before, Cavalieri seemed to be defending his method on abstruse technical grounds, which may or may not have been acceptable to fellow mathematicians. Either way, his argument bore no relation to the true motivation behind the method of indivisibles.
That motivation came to light in Cavalieri's response to Guldin's charge that he did not properly “construct” his figures. Here Cavalieri's patience was at an end, and he let his true colors show.

Guldin had claimed that every figure, angle and line in a geometric proof must be carefully constructed from first principles; Cavalieri flatly denied this. “For a proof to be true,” he wrote, “it is not necessary to describe actually these analogous figures, but it is sufficient to assume that they have been described mentally.”

And here is the true difference between Guldin and Cavalieri, between the Jesuits and the indivisiblists. For the Jesuits, the purpose of mathematics was to construct the world as a fixed and eternally unchanging place, in which order and hierarchy could never be challenged. That is why each item in the world had to be carefully and rationally constructed and why any hint of contradictions and paradoxes could never be allowed to stand. It was a “top-down” mathematics, whose purpose was to bring rationality and order to an otherwise chaotic world.

For Cavalieri and his fellow indivisiblists, it was the exact reverse: mathematics begins with a material intuition of the world—that plane figures are made up of lines and volumes of planes, just as a cloth is woven of thread and a book compiled of pages. One did not need to rationally construct such figures, because we all know that they already exist in the world. All that was needed was to assume them and then to investigate their inner structure. If we encounter seeming paradoxes and contradictions, they are bound to be superficial, resulting from our limited understanding, and can either be explained away or used as a tool of investigation. But they should never stop us from investigating the inner structure of geometric figures and the hidden relations between them.
For classical mathematicians such as Guldin, the notion that you could base mathematics on a vague and paradoxical intuition was absurd. “Who will be the judge” of the truth of a geometric construction, Guldin mockingly asked Cavalieri, “the hand, the eye or the intellect?” Cavalieri thought Guldin's insistence on avoiding paradoxes was pointless pedantry: everyone knew that the figures did exist and it made no sense to argue that they should not. Such nitpicking, it seemed to Cavalieri, could have grave consequences. If Guldin prevailed, a powerful method would be lost, and mathematics itself would be betrayed.