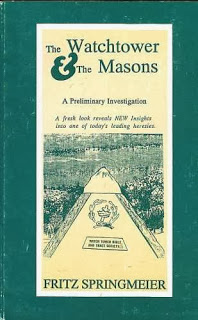 ‘The Watchtower & The Masons’ – Is There an Occult Connection?

Are there occult connections behind Jehovah's Witnesses and the Mormons?  Are Charles Taze Russell and Joseph Smith from Illuminati bloodlines?   An early book by Fritz Springmeier, "The Watchtower & the Masons," suspects outside influences behind Jehovah's Witnesses Watchtower Society.  Bethel headquarters of Jehovah's Witnesses Springmeier reports in 1993 Texe Marrs interview, takes direction from outside sources, i.e., Rockefellers, Morgans and Rothschilds.  Russell and Smith are identified as freemasons - Russell - a Knights Templar freemason.  The book termed a preliminary investigation, discovers Russell's fondness for winged sun disks and pyramids, reflecting influence of mystery religions of ancient Babylon and Freemasonry.  Springmeier implies Zionists behind both movements!  Wow!    We're so lucky Marrs and Springmeier are still hard at work!  Texe Marrs interview starts with part one below the fold.