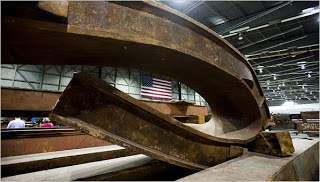 from upi: Steel debris from the Sept. 11, 2001, terrorist attack on New York’s World Trade Center is being offered to towns and cities for memorials, officials said. Nearly 2,000 pieces of steel, large and small, are being stored by the Port Authority of New York and New Jersey, which has filled about 25 requests and has a dozen more pending, The New York Times reported Monday. Twisted steel columns recently were shipped to York, Pa., and Westerville, Ohio, with a smaller piece shipped to the Air Defense offices in Rome, N.Y., Port Authority Executive Director Christopher Ward said. Requests must be approved by a federal judge overseeing wrongful death lawsuits stemming from the attack, the Times reported, noting the judge so far has granted all requests. “All we need is a 1-foot-by-1-foot-by-4-feet tall piece of steel,” said a letter from town officials in Glens Falls, N.Y. “It’s a small piece of steel to fill our big hearts.”

flashback: twin towers wreckage turning up all over the place