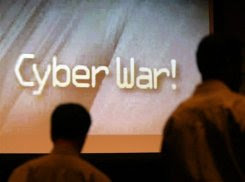 from the register: The US and Russia have begun talks on limiting the the military use of cyberspace. Entry into the cyber arms reduction talks - convened by a United Nations arms control committee - represents a significant shift for the US, which has resisted entering such talks for years, the New York Times reports. The change of tack came after the US decided that the cyberwarfare capabilities were spreading across the globe to countries such as North Korea and China.

The Russians have long called for talks on spreading the spread of cybermunitions along the lines of treaties limiting the spread of nuclear, biological and chemical warfare forged during the cold war era. The US has resisted such moves for a long time but is now coming around to the view that regulations do have some role to play.

The US wants the talks to cover greater international co-operation in the fight against cybercrime, while Russia is keen to discuss the supposed risks to national sovereignty posed by cyberterrorism. The Obama administration ordered a review of US internet security strategy in February but is yet to appoint anyone to the cybersecurity czar role established as part of the review.