fittingly, this execution comes as the mass murder contagion is, once again, raging across america… 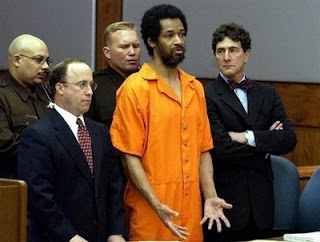 from ap: Gov. Tim Kaine denied clemency Tuesday for sniper John Allen Muhammad, clearing the way for him to be executed for the attacks that terrorized the nation’s capital region for three weeks in 2002.

Muhammad is set to die by injection Tuesday night at Greensville Correctional Center in Jarratt. His attorneys had asked Kaine to commute his sentence to life in prison because they say he is mentally ill. The U.S. Supreme Court turned down his final appeal.

“I find no compelling reason to set aside the sentence that was recommended by the jury and then imposed and affirmed by the courts,” Kaine, who is known for carefully considering death penalty cases, said in a statement. “Accordingly, I decline to intervene.”

Muhammad was sentenced to death for killing Dean Harold Meyers at a Manassas gas station during a three-week spree that left 10 dead across Maryland, Virginia and Washington, D.C.

He and his teenage accomplice, Lee Boyd Malvo, also were suspected of fatal shootings in other states, including Louisiana, Alabama and Arizona.

The motive for the shootings remains murky. Malvo said Muhammad wanted to use the plot to extort $10 million from the government to set up a camp in Canada where homeless children would be trained as terrorists. But Muhammad’s ex-wife has said she believes the attacks were a smoke screen for his plan to kill her and regain custody of their three children.

For the families of those killed, the day is a long time coming.

update: sniper who terrorized washington area is executed
from reuters: John Allen Muhammad was executed on Tuesday for masterminding and carrying out with his teenage accomplice the 2002 sniper shootings that killed 10 people and terrified the Washington, D.C., region a year after the September 11 and the deadly anthrax attacks. The 48-year-old Muhammad was put to death by lethal injection at the Greensville Correctional Center in Jarratt, Virginia, said Virginia Department of Corrections spokesman Larry Traylor. “Death was pronounced at 9:11 p.m. There were no complications. Mr. Muhammad was asked if he wished to make a last statement. He did not acknowledge us or make any statement whatsoever,” Traylor told reporters. “Things went very normally,” Traylor added.