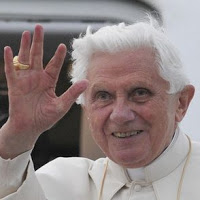 what will the pope say to vodun leaders?

from the wild hunt: This Friday the head of the Roman Catholic Church, Pope Benedict XVI, will be heading to Benin for a three-day visit where he is expected to unveil an “important document” relating to the Catholic Church’s role in Africa. What makes this visit distinctive is that Benin is thought to be the birthplace of Vodun (aka Vodou/Voodoo), and it is the third largest religion in that country (after Christianity and Islam). Indeed, the pontiff’s visit will feature a “a speech to non-Christian leaders” which can only mean he will be addressing practitioners of Vodun in some capacity. The Religious News Service speculates that Benedict’s message may not be one of mutual respect, understanding & cooperation.