Why Is Iceland A Portal to the Moon? 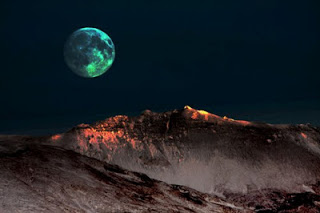 from JehSmith.com: In an article titled “Why is Iceland a Portal to the Moon?” written by Justin Eric Halldor Smith, Justin examines Iceland’s symbolic ties to the moon, Johannes Kepler’s perspective on spiritual commerce, and the association between Iceland and lunar voyages running deeper than previously imagined.
“The great German astronomer and natural philosopher Johannes Kepler, most famous for defending the Copernican system and for establishing the elliptical orbit of planets, began his 1634 Somnium, a scientific fantasy.(sometimes subtitled A Posthumous Work on Lunar Astronomy) Carl Sagan and Isaac Asimov have referred to it as the first work of science fiction) as follows:

“My name is Duracotus. My country is Iceland, which the ancients called Thule. My mother was Fiolxhilde. Her recent death freed me to write, as I had long wished to do. While she lived, she carefully kept me from writing. For, she said, the arts are loathed by many vicious people who malign what their dull minds fail to understand, and make laws harmful to mankind. Condemned by these laws, not a few persons have perished in the chasms of Hekla.”

The narrator goes on to describe his mother’s commercial undertakings in what might be euphemistically called ‘folk medicine’, or, slightly more bluntly, ‘natural magic’:

“In the earliest years of my boyhood my mother, leading me by the hand and sometimes hoisting me up on her shoulders, often used to take me up to the lower slopes of Mt. Hekla. These excursions were made especially around St. John’s Day, when the sun is visible all twenty-four hours, and there is no night. Gathering some herbs with many rites, she cooked them at home. She made little bags out of goatskin, which she filled and carried to a nearby port to sell to the ship captains. This is how she earned her living.”

That Kepler decides to preface what turns out to be a fairly serious work of lunar astronomy –to wit, a theoretical reflection upon the conditions on the still-mythical dark side of the moon– with this narrative set-up is peculiar, not least because we know, and his contemporaries knew, that it reflects Kepler’s own life in significant ways. Kepler’s own mother, Katharina Kepler, née Guldenmann (1546-1622), was in the years leading up to the Somnium’s composition being held in prison in Stuttgart on suspicion of witchcraft, under threat of imminent torture and execution. The son fought for years for his mother’s release, and eventually won it, but much of their life was spent in the frenetic uncertainty of the Hexenjagd. Kepler was concerned with witchcraft not only as a source of fanciful characters for his thin fictions.” –It is worth the read!