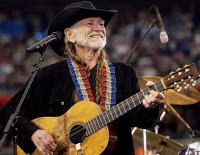 if only he would've mentioned this yesterday...

Agreeing with host Alex Jones that he questioned the official story, Nelson elaborated, "I saw those towers fall and I've seen an implosion in Las Vegas - there's too much similarities between the two, and I saw a building fall that didn't get hit by nothing," added Nelson, referring to WTC Building 7 which collapsed in the late afternoon of September 11.

"How naive are we - what do they think we'll go for?," asked Nelson, pointing out that his doubts began on the very day of 9/11.

"I saw one fall and it was just so symmetrical, I said wait a minute I just saw that last week at the casino in Las Vegas and you see these implosions all the time and the next one fell and I said hell there's another one - and they're trying to tell me that an airplane did it and I can't go along with that," said Nelson.

The former Highwayman, fresh from his appearance at this past weekend's superbowl, questioned why Afghanistan became an immediate target in the aftermath of 9/11 when the official story posited that mostly Saudi Arabians were responsible for the attack.

"When I get hit I like to look around and see who did it before I start swinging at everybody in the room and that's kind of what we were doing," said Nelson, "We get hit over here and then next thing you know we're jumping on everybody in the town - so (if) we got hit from Saudi Arabia, I think we've got some questions that need to be answered from those folks," said Nelson.

In light of his viewpoint, Nelson said that recent revelations concerning the impartiality of the 9/11 Commission and its close links with the White House did not surprise him.

"What does it take for us to realize we're having the wool pulled over our eyes one more time?" he concluded.

Nelson is not the first high-profile public figure to question 9/11. In March 2006, actor Charlie Sheen voiced his doubts and was followed last year by his father Martin Sheen.

Aside from celebrities - professors, scientists and other experts the world over have questioned the inconsistencies in the official story, and the topic was most recently even a subject of serious debate in the Japanese Parliament.

Nelson's country music contemporaries The Dixie Chicks were savaged by the establishment when they criticized the Bush administration shortly before the invasion of Iraq. It remains to be seen whether the corporate media will dare take on Nelson for his views or whether they will just try to ignore the story as happened with Martin Sheen.

click here to listen to the willie nelson interview

and drudge report was for it, before he was against it... and now even the associated press have picked up the story...