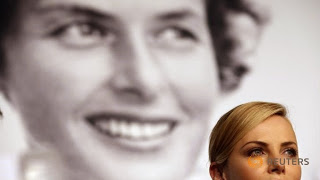 Women’s Role in Film on the Red Carpet at #Cannes

from reuters.com: Charlize Theron's character Imperator Furiosa in "Mad Max: Fury Road" is pretty much on an equal footing with Tom Hardy playing the road warrior of the title, but the South African actress says it's not often that way in an industry dominated by men.

The much heralded reboot of the famous 1980s dystopian action franchise is being screened on Thursday at the Cannes International Film Festival, where the subject of women's role in cinema - not just in front of the camera but behind it - has been in the spotlight this year.

Theron, who is best known as an actress but also produced and starred in "Monster" (2003), said too many women "have to sit around and really wait for the right thing to come around and there's a lot of wrong things going around and I feel like there is an injustice".

Men get the better opportunities, she told Reuters, but when women do get a chance, people connect strongly with the films.

"They're always the movies people talk about the most, they're the critically acclaimed ones, and I just don't understand why we can't take that momentum and really put it in gear," she said.

Thierry Fremaux, the director of the Cannes festival, provoked the debate by pointing out in interviews that "the number of female directors in the world is too low".

For the first time in decades, the festival opened with a film directed by a woman, France's Emmanuelle Bercot, but Fremaux said films had been selected because they suited the festival, not because of the director's gender.

"I think the most important fight is the situation of women in the world, not only in cinema," he said.

Bercot said she didn't think gender had been a factor in her film being shown, out of competition, at the star-studded gala on Wednesday night.