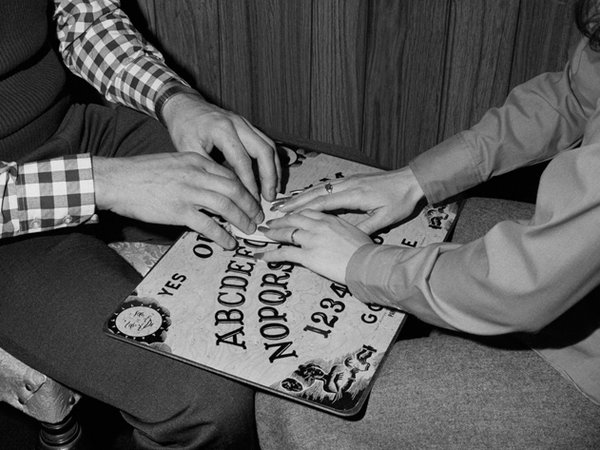 The Strange and Mysterious History of the Ouija Board

from smithsonianmag.com: In February, 1891, the first few advertisements started appearing in papers: “Ouija, the Wonderful Talking Board,” boomed a Pittsburgh toy and novelty shop, describing a magical device that answered questions “about the past, present and future with marvelous accuracy” and promised “never-failing amusement and recreation for all the classes,” a link “between the known and unknown, the material and immaterial.” Another advertisement in a New York newspaper declared it “interesting and mysterious” and testified, “as sProven at Patent Office before it was allowed. Price, $1.50.

This mysterious talking board was basically what’s sold in board game aisles today: A flat board with the letters of the alphabet arrayed in two semi-circles above the numbers 0 through 9; the words “yes” and “no” in the uppermost corners, “goodbye” at the bottom; accompanied by a “planchette,” a teardrop-shaped device, usually with a small window in the body, used to maneuver about the board. The idea was that two or more people would sit around the board, place their finger tips on the planchette, pose a question, and watch, dumbfounded, as the planchette moved from letter to letter, spelling out the answers seemingly of its own accord. The biggest difference is in the materials; the board is now usually cardboard, rather than wood, and the planchette is plastic.

Though truth in advertising is hard to come by, especially in products from the 19th century, the Ouija board was “interesting and mysterious”; it actually had been “proven” to work at the Patent Office before its patent was allowed to proceed; and today, even psychologists believe that it may offer a link between the known and the unknown.


The real history of the Ouija board is just about as mysterious as how the “game” works. Ouija historian Robert Murch has been researching the story of the board since 1992; when he started his research, he says, no one really knew anything about its origins, which struck him as odd: “For such an iconic thing that strikes both fear and wonder in American culture, how can no one know where it came from?”

The Ouija board, in fact, came straight out of the American 19th century obsession with spiritualism, the belief that the dead are able to communicate with the living. Spiritualism, which had been around for years in Europe, hit America hard in 1848 with the sudden prominence of the Fox sisters of upstate New York; the Foxes claimed to receive messages from spirits who rapped on the walls in answer to questions, recreating this feat of channeling in parlors across the state. Aided by the stories about the celebrity sisters and other spiritualists in the new national press, spiritualism reached millions of adherents at its peak in the second half of the 19th century. Spiritualism worked for Americans: it was compatible with Christian dogma, meaning one could hold a séance on Saturday night and have no qualms about going to church the next day. It was an acceptable, even wholesome activity to contact spirits at séances, through automatic writing, or table turning parties, in which participants would place their hands on a small table and watch it begin shake and rattle, while they all declared that they weren’t moving it. The movement also offered solace in an era when the average lifespan was less than 50: Women died in childbirth; children died of disease; and men died in war. Even Mary Todd Lincoln, wife of the venerable president, conducted séances in the White House after their 11-year-old son died of a fever in 1862; during the Civil War, spiritualism gained adherents in droves, people desperate to connect with loved ones who’d gone away to war and never come home.

“Communicating with the dead was common, it wasn’t seen as bizarre or weird,” explains Murch. “It’s hard to imagine that now, we look at that and think, ‘Why are you opening the gates of hell?’”
But opening the gates of hell wasn’t on anyone’s mind when they started the Kennard Novelty Company, the first producers of the Ouija board; in fact, they were mostly looking to open Americans’ wallets.

As spiritualism had grown in American culture, so too did frustration with how long it took to get any meaningful message out of the spirits, says Brandon Hodge, Spiritualism historian. Calling out the alphabet and waiting for a knock at the right letter, for example, was deeply boring. After all, rapid communication with breathing humans at far distances was a possibility—the telegraph had been around for decades—why shouldn’t spirits be as easy to reach? People were desperate for methods of communication that would be quicker—and while several entrepreneurs realized that, it was the Kennard Novelty Company that really nailed it.

In 1886, the fledgling Associated Press reported on a new phenomenon taking over the spiritualists’ camps in Ohio, the talking board; it was, for all intents and purposes, a Ouija board, with letters, numbers and a planchette-like device to point to them. The article went far and wide, but it was Charles Kennard of Baltimore, Maryland who acted on it. In 1890, he pulled together a group of four other investors—including Elijah Bond, a local attorney, and Col. Washington Bowie, a surveyor—to start the Kennard Novelty Company to exclusively make and market these new talking boards. None of the men were spiritualists, really, but they were all of them keen businessmen and they’d identified a niche.