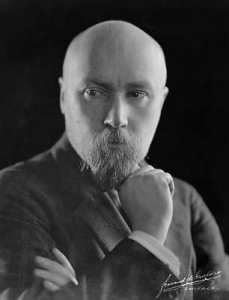 A Dreamer Out of Time: Nicholas Roerich

from theimaginativeconservative.org: In a large part of the Western mindset, Russian culture only really existed in the nineteenth century. Before Vladimir Putin’s kleptocracy and before the horrific purges of the Soviets, Russia was, we are led to believe, a somewhat backwards land that nevertheless managed to produce great works of art. Undoubtedly, Russia in the nineteenth century did turn out spectacular talents, from the poetry of the great Alexander Pushkin to the novels of Fyodor Dostoevsky and the music of Pyotr Ilyich Tchaikovsky. Czarism then, and Eurasian monarchism more generally, seems to be quite the catalyst, with Russia as the grand and sweeping salon of the steppes.

While tremendous time and effort have been justly used in the study of Russia’s “Golden Era,” too little time has been spent on its virtuosos of its twentieth century. For my money (a humble resource, indeed), no novel can compare to Mikhail Bulgakov’s fiendishly good The Master and Margarita, and few composers can tickle my ears quite like the often overlooked Sergei Prokofiev. But, when it comes to the finer things in life, none has gotten the dust-off more than Russian painting, especially the pre- and post-Soviet masters who failed to tow the avant-garde and social realist lines.
Chief among these nonconformists is Nicholas Roerich, a man ostensibly of the esoteric school of modernism.
Born Nicholas Konstantinovich Roerich in Saint Petersburg to a well-to-do family, Roerich remains a man out of time. Although Roerich met and was influenced by the many great artists of the day (Roerich knew personally Vladimir Strasov and the musicians Modest Mussorgsky, Igor Stravinsky, and Nicolai Rimsky-Korsakov) and even though Roerich matriculated at the prestigious Imperial Academy of Arts, he remains a rather unorthodox traditionalist. Through his many interests, which included poetry, philosophy, painting, archeology, and Eastern religions, Roerich created a deeply imaginative world full of color, transcendence, and most importantly, history. In this way, Roerich’s spiritual antecedent is the great Russian master Viktor Vasnetsov.
Born a few generations before Roerich, Vasnetsov’s paintings display a uniquely Russian view of history, with Slavic and Western elements commingling alongside pagan naturalism and the ornate beauty of Orthodox Christianity. On top of that, Vasnetsov’s paintings all contain elements of the heroic, regardless of subject. For instance, Vasnetsov’s 1876 painting Moving House, which explores the grueling harshness of poverty set amidst the unforgiving Russian winter, focuses the audience’s attention on the courage of common people without giving into the grotesqueness of “social realism” (which to be fair coalesced as a recognizable and politicized movement much later).
While Vasnetsov primarily concerned himself with Russian scenes, both historical and contemporary, Roerich’s paintings, even his earliest, which attempt to fabulously depict the ascendancy of the Kievan Rus’ period and its confluence of Germanic and Slavic peoples, seem like snapshots taken from a different world. Roerich’s landscapes are both recognizable and unfamiliar in ways that make them all the more beautiful. Early Roerich indeed portrayed Russia and its people in ways similar to J.R.R. Tolkien, who re-imagined and even perfected the rural English ideal vis-à-vis the Shire and its large-footed denizens.
For Roerich and the Russian artists of his generation, history and tradition were vital. On the one hand, Russia before the cataclysm of the Bolshevik Revolution was a nation constantly in search of itself. Besides the constant friction between those who desired a closer relationship with Western Europe and those who sought to keep Russia as a unique Eurasian power, the late nineteenth and early twentieth centuries also saw a renewed interest in the ancient, pre-Christian past of Europe. In Great Britain and the ascendent power of Germany, artists, musicians, and scholars romanticized their barbarian ancestors, especially the Scandinavian Vikings, through heroic operas (see: practically anything by Wagner), breathtaking paintings, and, more importantly, a new academic discipline that came to be known as “Germanic Studies.”
A Russian or a greater Slavic version of this did not come as easily. Unlike the Germanic peoples, who not only wrote their legends and sagas down in the various tongues of Northern Europe, but who also had highly interested chroniclers in the Romans and then the later Christian writers of Carolingian France and the British Isles, the Slavs had no first-hand records to consult, only oral tradition. As such, Roerich and others re-created and recast their own traditions and mythology in ways that were not restrained by written accounts. Roerich, as a great dreamer, found this entirely suitable for a time.
Amazingly, even despite the mysterious history of the Slavic peoples, Roerich’s entire oeuvre has less to do with Russia and its past, and more to do with the greater East. From the 1920s onwards, Asia, especially India, Tibet, and China, became Roerich’s great muse. As a decidedly more benign version of the White Russian aristocrat Baron Roman von Ungern-Sternberg, whose attraction to Buddhism led him to personally occupy Mongolia in the hopes of restoring the Bogd Khan, Roerich increasingly grew to equate Asian history and mysticism with the last redoubt of imagination in the world.
Not coincidentally, Roerich’s gravitation towards Asia came around the same time as the Bolshevik victory in the Russian Civil War. At first, right after the February Revolution of 1917, Roerich tried to take an active part in artistic politics, namely he acted as a voice decrying the need for protection against vandalism and desecration in such places as Moscow and Saint Petersburg. Within months however, Roerich was disillusioned with the goals of the Communists, and his voluntary relocation to Karelia turned into an outright emigration to Finland. Never an ideologue committed to either liberalism or monarchism, Roerich’s antipathy to Soviet-style Communism was mostly driven by his fears that Marxist-Leninist doctrine would thoroughly gut and distort Russian traditions, which of course they did.
As an intellectual in self-imposed exile, Roerich reached his greatest heights artistically, managing to churn out one majestic painting after another. During this period, Roerich was not only under the spell of the Asian landscape (which he visited numerous times before ultimately settling down in the mountainous Himachal Pradesh region of northern India), but he was also thoroughly engaged in matters of the occult, namely Helena Blavatsky, a fellow Russian, and her cult of Theosophy. While under the thrall of Theosophy and the more esoteric strands of Buddhism, Roerich and his wife Helena founded their own discipline, which they called Agni Yoga. Agni Yoga not only influenced Roerich’s paintings, which after 1920 are full of both spiritual and Theosophical images (especially Roerich’s The Last of Atlantis), but it also played a major role in Roerich’s poetry, which is replete with quasi-religious intonations. Take for instance the poem “Sacred Signs”:

Father—the peaceful. Son—the peaceful. Spirit—the peaceful.
The three equal. The three indivisible.
The blue sea—is their heart.
The stars—their eyes.
The night dawn—their mouth.
The depth of divinity—the sea.
The evil walk upon the sea.
Blind to them are the arrows of the demons.
Lynx, wolf, gerfalcon,
Guard the evil ones!
Keios, Keyosavi, let them in,
The evil.

This combination of spiritualism and abstract history would stay with Roerich for the remainder of his life. In the meantime, while the Roerichs contemplated a Spiritual Union of the East, a utopian vision centered in Central Asia, and even got a number of countries to sign on to the Roerich Pact, which was designed as “The Red Cross of Culture” that would ensure the safety of cultural production even during wartime, others were drawing influence from Roerich as well. Roerich’s many speaking engagements as well as his numerous works of art netted impressive followers and adherents such as American President Franklin D. Roosevelt and Vice President Henry A. Wallace. Politicians were not the only ones either, for the American pulp writer H.P. Lovecraft spoke often of his appreciation for Roerich and once wrote to his friend James F. Morton that “there is something in his [Roerich’s] handling of perspective and atmosphere which to me suggests other dimensions and alien orders of being – or at least, the gateways to such.” Notably, Lovecraft’s At the Mountains of Madness was influenced by Roerich’s renderings of Tibet’s glacial precipices.
Nowadays, Roerich’s legacy is kept alive through the Nicholas Roerich Museum in New York and its accompanying website. Besides being a wonderful place to waste the afternoon, the museum can act as a refuge for those dwellers in the Big Apple who want to escape the modern world every now and then. Given recent world events and the ever-increasing mindlessness of today’s liberal arts institutions, the fine people at the Nicholas Roerich Museum should expect an attendance increase, or at least an increase among those with their imaginations still intact.