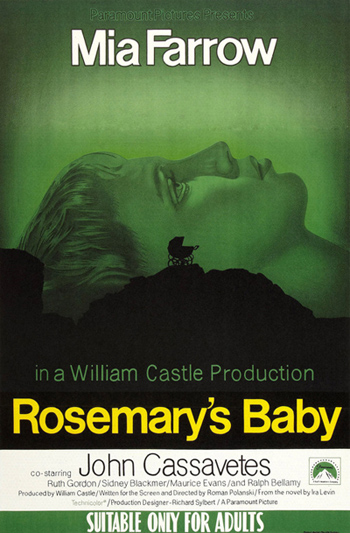 Rosemary’s Baby: A Warning to the Curious

from crisismagazine.com: Unexpectedly, I came across a reference to NBC re-making Rosemary’s Baby into a four-hour mini-series; press reports suggest that shooting has already begun this month. With this news, a fear began to grip as my thoughts returned to the original.

Strange tales grow up around movies. Like many before and since, Rosemary’s Baby has had its fair share. There is one, however, regarding that 1968 movie that to this day, continues to disquiet, revealing as it does a tale seemingly darker than that which transpired upon the screen.

Sharon Tate was one of the “faces” of the 1960s—like Christie and Bardot; she too had “the look.” Her star has somewhat faded now, but she was fast becoming an intrinsic part of that decade. Born into a middle class Catholic family in California, she was to hear Hollywood’s siren call—from then her path was set. At precisely the same time as another was making his way there with a similar goal, albeit from a very different place.  A Polish Jew named Roman Polanski had forged, with one film, a reputation as a director of promise in his native land. Now, with an eye to the international stage, he was coming to London, just as Tate was arriving in England to film her first major role: playing the part of a witch in the Eye of the Devil (1966). Decisively, their paths were to cross.


Polanski’s London based film, Repulsion (1965), marked out the young Pole still further. It starred another 60s icon, Catherine Deneuve (similar in looks to Tate) who played an isolated young woman going slowly mad in a South Kensington apartment, before a frenzied killing with an axe. At the time, it was to be as disturbing a piece of cinema as it was to prove successful with critics and audiences alike.  Cinema was throwing off moral constraints at the perceived dawning of a new age, and films such as Polanski’s, with recurring themes of murder, madness, and the supernatural were to be in the vanguard of this emerging order.

Thereafter, a very 1960s affair ensued between the now lovers, Tate and Polanski—she wanting marriage and children, while he wanting his “freedom” and her. The Spirit of the Age dictated that she acquiesce, which she duly did. International celebrity for both followed, becoming one of Cinema’s “Golden Couples” in the process. Inevitably after the success of his European films, Polanski was beckoned to America with a view to making his first U.S. film: Rosemary’s Baby—based upon the 1967 best-selling novel by Ira Levin. Unsurprisingly, Tate was his first choice to play the lead—a plan, later, aborted. Nevertheless, the stage was inexorably being set.

Still to this day, Rosemary’s Baby (1968) is a chilling movie. The plot is of an actor who sacrifices his wife’s fecundity to evil so that his career subsequently flourishes; and flourish it does. I remember the first time I saw it on television, one Halloween in the late 1970s. Even then, I realized that this was a strangely different sort of “horror” film to any I had thus far experienced, and a long way from the studios of Universal and Hammer. Here was something distinct, and with a peculiar feel that disturbed. Barely a teenager, I wasn’t sure why. Over thirty years later, I watched the movie again—it disturbed me even more than it had that first time, only now I began to understand.

For a start, until the late 1960s, there had never been a Hollywood film where evil triumphed so blatantly; and what evil, nothing less than the birth of the Anti-Christ.  There are, of course, many other, more subtle (and all the more disquieting for that) hints of evil suffused throughout—for example, the real 1966 Time Magazine cover asking: “Is God Dead?” And the use of actual footage of Pope Paul VI’s visit to New York City in 1965, with its accompanying mocking by the now Satanist husband to his still nominally Catholic wife, Rosemary. Other, more lurid, attacks on the Church are present. Be in no doubt, a palpable darkness pervades this movie from the start.

And then, there is Rosemary: an innocent cut adrift, the slowly crumbling, unknowing mother-to-be—brilliantly played by Mia Farrow—isolated, spiritually as well as physically, increasingly alarmed at the realization that she can trust no-one. As the net continues to tighten, we watch with equal unease, knowing her predicament is far worse than she could ever have imagined. In this horror movie, like none before, there is to be no escape for Rosemary. For this is a truly nightmarish plot from start to dire finish, ending as it does with that final scene’s infernal adoration ringing out: “Hail Satan!”

A frequent visitor to the set of Rosemary’s Baby, Tate was the subject of a series of photographs taken at the time by Esquire. In retrospect, these images appear as eerie as the movie itself. Moreover, a peculiar conversation took place shortly after the movie’s completion, when she startled a friend by saying: “The Devil is beautiful. Most people think he’s ugly, but he’s not.” Curious words indeed, and spoken by one blinded by the entity of which she spoke—the Father of Lies—whose “beauty” was but a mask beyond which lay only Death.

Rosemary’s Baby burst onto cinema screens during the summer of 1968, only a handful of weeks before Humane Vitae also arrived, if to less thunderous applause. One taught the truths of human life and love, the other was but a nefarious parody; one caught the Zeitgeist and was lauded, the other pilloried. Nevertheless, both were prophetic, and in their very different ways marked the beginning of a battle for more than just the soul of Hollywood.

Needless to say, the film was released to great critical and commercial success. At the New York premiere one woman did cry: “Blasphemy!”—she was mocked. The Catholic League of Decency, by then on its last legs, tried to protest but was immediately dismissed—the tide had turned.

Meanwhile, Polanski’s career “took off.” The future must indeed have looked golden; and yet, while the director and his now wife were making their new home in the hills over Hollywood, every move was being scrutinized. Unfortunately for them, the eyes so doing were those of a madman, by the name of Charles Manson. Manson, a self-styled “guru,” and his followers—”The Family”—were deranged, but, more worryingly still, they lusted after blood.

And so it was, on August 9, 1969, just as the clocks struck midnight, wishing “to do the work of the Devil”—as was their later boast—”The Family” in a packed automobile made for the Santa Monica Mountains: having already decided who was to be their next victim.

With Polanski absent, this murderous cabal smashed their way into the young couple’s home. It was there that the “blood sacrifice” was to be offered—two in fact, for Tate was heavily pregnant. That night, like the fictional mother at the close of Rosemary’s Baby, Sharon Tate was also robbed of what lay in her womb, as well as of life itself; and, as was the case with Rosemary, by chanting men and women who claimed to worship the Evil One—only this was no fiction, but, instead, all too real.
It is an old and wise maxim not to dabble in “things” of the Occult. One foolishly forgotten in these days when such powers are naively played with, looked upon as nothing but “harmless fun,” and therefore invoked unwittingly.

Still, even for non-believers, it would seem at least prudent to leave such things well alone. On that dreadful night, Sharon Tate may well have thought so. In those last minutes of life, we can only surmise what thoughts flooded her mind. Possibly they turned to her husband’s first American film?
Later, at the trial of her murderers, it was revealed that her last cry was but one word: “Mother.” A call for help, perhaps a reference to that earlier film, or, was it a prayer? It is hoped before the final blow fell, with assailants impervious to her cries for mercy, that Sharon Marie Tate gasped at least one plea for Divine Mercy. For, foolishly, she too had joined, however tangentially, with those assembled Satanists in welcoming their “Lord” into this realm in that final scene of Rosemary’s Baby, and was now hearing the diabolic echo of that earlier cry of “Hail…”—only this time it was sealing not the fate of Rosemary’s baby, but that of her own.

For here, truly revealed at last, was the Father of Lies, a murderer from the beginning.