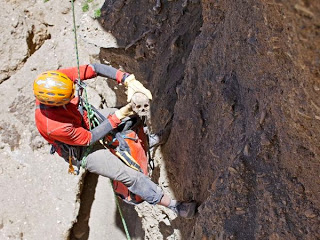 from news.nationalgeographic.com: The remains of 27 ancient men, women, and children have been found in cliffside caves in Nepal. Many of the bones bear cut marks that point to a previously unknown Himalayan death ritual, experts say.

The corpses—many of which had been stripped of flesh—were placed in the high mortuaries some 1,500 years ago, the team announced Friday.

Nearly 67 percent of the bodies' had been defleshed, most likely with a metal knife, say the researchers, who found the remains in 2010.

After the de-fleshing process, the corpses had been neatly laid to rest on wide wooden shelves, the researchers speculate. But due to centuries of exposure to the elements, the bones and bunks—and much of the caves themselves—had collapsed by the time the team entered the chambers.

Also in the jumble: goat, cow, and horse remains—perhaps sacrificial offerings for the dead, though their purpose remains a mystery. Dug into characteristically reddish cliffs of the Upper Mustang district, the human-made caves lie at 13,800 feet (4,200 meters) above sea level, high above the village of Samdzong.

In ancient times, rock outcrops and probably ladders would have eased access to the caves. Since then, however, erosion has rendered the chambers accessible to only expert climbers, such as seven-time Everest summiter Pete Athans, who co-led the team." Clues to when these caves were built, and by whom, are melting before our eyes," Athans said in a press statement. "The cave tomb we found is under great threat. It is situated in a fragile rock matrix that has already collapsed some time in the past. I don't believe the tomb would've lasted one more monsoon."

De-fleshed, With All Due Respect
Little is known about the three ancient Himalayan groups that de-fleshed and entombed their dead in the high Mustang caves, making the motives behind the rite even murkier. The team has, however, ruled out cannibalism.

"When you're going for meat, you process a skeleton in a very different way than if you were trying to strip the flesh off," explained project leader Mark Aldenderfer, an archaeologist at the University of California, Merced.
"In cannibalism, the base of the skull is often smashed [to get at the brains], and bones are broken and twisted, usually for marrow. There's nothing like that in any of the bone parts that we recovered....

Preliminary DNA analysis of some of the bones suggests the de-fleshing subjects were related.

"I would imagine that many of these mortuary caves are for large extended families," Aldenderfer said.

"This would be their traditional burial place, and another family would have their own."

Secondhand Rite?
Aldenderfer and his team think the practice of de-fleshing corpses and entombing them in caves might be a previously unknown bridge between two other known death rituals.

One, the Tibetan sky burial—thought to have originated several hundred years later—involves dismembering a body and exposing it to the elements and to scavengers such as vultures. Present-day Tibet is just 10 miles (16 kilometers) from the cave tombs.

The other funerary rite is older and hails from the Zoroastrian religion, which has its roots in ancient Persia (now Iran). Zoroastrians, Aldenderfer said, "are known to have de-fleshed their dead and fed the flesh to animals."

Ancient people living in the Upper Mustang region may have adopted funerary rituals of passing Zoroastrians as they traveled west, Aldenderfer said. These rites, in turn, may have transformed into, or inspired, the Tibetan sky-burial ritual.

That idea, according to anthropologist Mark Turin, who wasn't part of the project, is "an interesting and perfectly workable hypothesis."

Bloodstained Landscape
The new finds are only the latest to be uncovered in the remote cliffs.

In the 1980s a Nepalese-German team discovered cave tombs dating back about 3,000 years. The human remains in those caves hadn't been de-fleshed, however.

And in 2009 the team behind the new discovery announced they'd found a cliff-cave trove of Tibetan art, manuscripts, and skeletons dating back to the 15th century.

In addition to the newfound mortuary caves, Aldenderfer's team has found nearby caves that were created later, likely for use as living spaces.

"I don't think the people who built those 'apartment complexes' actually knew that those mortuary caves were nearby," Aldenderfer said.

Turin, director of the Digital Himalaya Project at the University of Cambridge, said he's not surprised that people have been repeatedly drawn to the Upper Mustang cliffs, despite the challenges.

In fact, the cliffs' isolation may have been an important part of their allure. Many of the local beliefs that have been practiced in the region, including Buddhism, place great value on the idea of religious retreat, Turin said.

"Monks can now practice and reside in monasteries, but we're talking about long before the establishment of any monastery," he said.

"These [caves] may well have been proto-monastic places ... and as such, people might retreat or bury their dead there."

Also, Turin said, ancient people may have felt tied to the landscape in a way that might be hard for many modern Westerners to understand.

Even today, "a well-known story is in circulation about the taming of the territory. ... When the Buddhist saints came up and slew the local deities, their blood and [body parts] stained the Earth and created the colors" of the landscape, Turin said.

"The religious culture that exists in people's minds can be mapped onto the landscape. This means that the landscape is sacred, and that caves and places of retreat are similarly sacred."