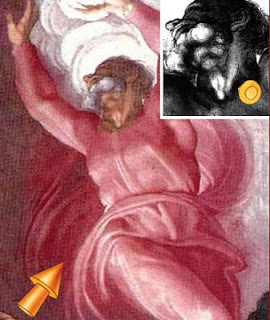 from scientificamerican.com: At the age of 17 he began dissecting corpses from the church graveyard. Between the years 1508 and 1512 he painted the ceiling of the Sistine Chapel in Rome. Michelangelo Buonarroti—known by his first name the world over as the singular artistic genius, sculptor and architect—was also an anatomist, a secret he concealed by destroying almost all of his anatomical sketches and notes. Now, 500 years after he drew them, his hidden anatomical illustrations have been found—painted on the ceiling of the Sistine Chapel, cleverly concealed from the eyes of Pope Julius II and countless religious worshipers, historians, and art lovers for centuries—inside the body of God.

This is the conclusion of Ian Suk and Rafael Tamargo, in their paper in the May 2010 issue of the scientific journal Neurosurgery. Suk and Tamargo are experts in neuroanatomy at the Johns Hopkins University School of Medicine in Baltimore, Maryland. In 1990, physician Frank Meshberger published a paper in the Journal of the American Medical Association deciphering Michelangelo’s imagery with the stunning recognition that the depiction in God Creating Adam in the central panel on the ceiling was a perfect anatomical illustration of the human brain in cross section. Meshberger speculates that Michelangelo surrounded God with a shroud representing the human brain to suggest that God was endowing Adam not only with life, but also with supreme human intelligence. Now in another panel The Separation of Light from Darkness, Suk and Tamargo have found more. Leading up the center of God’s chest and forming his throat, the researchers have found a precise depiction of the human spinal cord and brain stem.