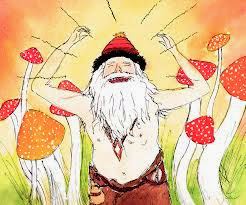 Our Ancestors Were High as F*k

from ultraculture.org: New evidence suggests that ancient humans regularly used mind-altering substances—but for sacred reasons, not making cartoons more entertaining. Ancient humans were tripping balls, new research shows. But unlike us, they were doing it for the right reasons. A recent study published in the Journal of Archaeological Method and Theory suggests that ancient humans did not use mind-altering substances for hedonistic pleasure, as we often do in the modern day.

Elisa Guerra-Doce of the Universidad de Valladolid in Spain contends that the use of these substances was integral to the beliefs of prehistoric peoples, and that their use was believed to aid in communication with the spirit world. Her research adds to the growing body of cutting-edge literature about the cultural and historical context of mind-altering substances in prehistoric Europe.

Her argument is based on evidence found in archaeological sites covering a wide geographic and cultural range in Europe: opium poppies in the teeth of an adult male of Neolithic Spain, traces of barley beer on ceramic vessels recovered on the Iberian Peninsula, artistic depictions of hallucinogenic mushroom use in the Italian Alps, and charred Cannabis seeds in bowls found in Romania. It’s proposed that the use of these substances was intended to alter ordinary consciousness or achieve an advanced trance state. Since the majority of these finds were in tombs and ceremonial spaces, Guerra-Doce came to the conclusion that these substances were strongly linked to ritual use. While details of the rituals remain unclear, her hypothesis is that the substances played a significant role in mortuary rites, as a means of providing sustenance for the departed in their afterlife journey, or as an offering for deities of the underworld.