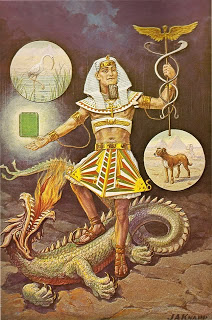 The Conclusion of “The Secret Teachings of All Ages”

PHILIP, King of Macedon, ambitious to obtain the teacher who would be most capable of imparting the higher branches of learning to his fourteen-year-old son, Alexander, and wishing the prince to have for his mentor the most famous and learned of the great philosophers, decided to communicate with Aristotle. He dispatched the following letter to the Greek sage: "PHILIP TO ARISTOTLE, HEALTH: Know that I have a son. I render the gods many thanks; not so much for his birth, as that he was born in your time, for I hope that being educated and instructed by you, he will become worthy of us both and the kingdom which he shall inherit." Accepting Philip's invitation, Aristotle journeyed to Macedon in the fourth year of the 108th Olympiad, and remained for eight years as the tutor of Alexander. The young prince's affection for his instructor became as great as that which he felt for his father. He said that his father had given him being, but that Aristotle had given him well-being.

The basic principles of the Ancient Wisdom were imparted to Alexander the Great by Aristotle, and at the philosopher's feet the Macedonian youth came to realize the transcendency of Greek learning as it was personified in Plato's immortal disciple. Elevated by his illumined teacher to the threshold of the philosophic sphere, he beheld the world of the sages--the world that fate and the limitations of his own soul decreed he should not conquer.

Aristotle in his leisure hours edited and annotated the Iliad of Horner and presented the finished volume to Alexander. This book the young conqueror so highly prized that he carried it with him on all his campaigns. At the time of his triumph over Darius, discovering among the spoils a magnificent, gem-studded casket of unguents, he dumped its contents upon the ground, declaring that at last he had found a case worthy of Aristotle's edition of the Iliad!

While on his Asiatic campaign, Alexander learned that Aristotle had published one of his most prized discourses, an occurrence which deeply grieved the young king. So to Aristotle, Conqueror of the Unknown, Alexander, Conqueror of the Known, sent this reproachful and pathetic and admission of the insufficiency of worldly pomp and power: "ALEXANDER TO ARISTOTLE, HEALTH: You were wrong in publishing those branches of science hitherto not to be acquired except from oral instruction. In what shall I excel others if the more profound knowledge I gained from you be communicated to all? For my part I had rather surpass the majority of mankind in the sublimer branches of learning, than in extent of power and dominion. Farewell." The receipt of this amazing letter caused no ripple in the placid life of Aristotle, who replied that although the discourse had been communicated to the multitudes, none who had not heard him deliver the lecture (who lacked spiritual comprehension) could understand its true import.

A few short years and Alexander the Great went the way of all flesh, and with his body crumbled the structure of empire erected upon his personality. One year later Aristotle also passed into that greater world concerning whose mysteries he had so often discoursed with his disciples in the Lyceum. But, as Aristotle excelled Alexander in life, so he excelled him in death; for though his body moldered in an obscure tomb, the great philosopher continued to live in his intellectual achievements. Age after age paid him grateful tribute, generation after generation pondered over his theorems until by the sheer transcendency of his rational faculties Aristotle--"the master of those who know," as Dante has called him--became the actual conqueror of the very world which Alexander had sought to subdue with the sword.

Thus it is demonstrated that to capture a man it is not sufficient to enslave his body--it is necessary to enlist his reason; that to free a man it is not enough to strike the shackles from his limbs--his mind must be liberated from bondage to his own ignorance. Physical conquest must ever fail, for, generating hatred and dissension, it spurs the mind to the avenging of an outraged body; but all men are bound whether willingly or unwillingly to obey that intellect in which they recognize qualities and virtues superior to their own.

That the philosophic culture of ancient Greece, Egypt, and India excelled that of the modern, world must be admitted by all, even by the most confirmed of modernists. The golden era of Greek æsthetics, intellectualism, and ethics has never since been equaled. The true philosopher belongs to the most noble order of men: the nation or race which is blessed by possession of illumined thinkers is fortunate indeed, and its name shall be remembered for their sake. In the famous Pythagorean school at Crotona, philosophy was regarded as indispensable to the life of man. He who did not comprehend the dignity of the reasoning power could not properly be said to live. Therefore, when through innate perverseness a member either voluntarily withdrew or was forcibly ejected from the philosophic fraternity, a headstone was set up for him in the community graveyard; for he who had forsaken intellectual and ethical pursuits to reenter the material sphere with its illusions of sense and false ambition was regarded as one dead to the sphere of Reality. The life represented by the thraldom of the senses the Pythagoreans conceived to be spiritual death, while they regarded death to the sense-world as spiritual life.

Philosophy bestows life in that it reveals the dignity and purpose of living. Materiality bestows death in that it benumbs or clouds those faculties of the human soul which should be responsive to the enlivening impulses of creative thought and ennobling virtue. How inferior to these standards of remote days are the laws by which men live in the twentieth century! Today man, a sublime creature with infinite capacity for self-improvement, in an effort to be true to false standards, turns from his birthright of understanding--without realizing the consequences--and plunges into the maelstrom of material illusion. The precious span of his earthly years he devotes to the pathetically futile effort to establish himself as an enduring power in a realm of unenduring things. Gradually the memory of his life as a spiritual being vanishes from his objective mind and he focuses all his partly awakened faculties upon the seething beehive of industry which he has come to consider the sole actuality. From the lofty heights of his Selfhood he slowly sinks into the gloomy depths of ephemerality. He falls to the level of the beast, and in brutish fashion mumbles the problems arising from his all too insufficient knowledge of the Divine Plan. Here in the lurid turmoil of a great industrial, political, commercial inferno, men writhe in self-inflicted agony and, reaching out into the swirling mists, strive to clutch and hold the grotesque phantoms of success and power.

Ignorant of the cause of life, ignorant of the purpose of life, ignorant of what lies beyond the mystery of death, yet possessing within himself the answer to it all, man is willing to sacrifice the beautiful, the true, and the good within and without upon the blood-stained altar of worldly ambition. The world of philosophy--that beautiful garden of thought wherein the sages dwell in the bond of fraternity--fades from view. In its place rises an empire of stone, steel, smoke, and hate-a world in which millions of creatures potentially human scurry to and fro in the desperate effort to exist and at the same time maintain the vast institution which they have erected and which, like some mighty, juggernaut, is rumbling inevitably towards an unknown end. In this physical empire, which man erects in the vain belief that he can outshine the kingdom of the celestials, everything is changed to stone, Fascinated by the glitter of gain, man gazes at the Medusa-like face of greed and stands petrified.

In this commercial age science is concerned solely with the classification of physical knowledge and investigation of the temporal and illusionary parts of Nature. Its so-called practical discoveries bind man but more tightly with the bonds of physical limitation, Religion, too, has become materialistic: the beauty and dignity of faith is measured by huge piles of masonry, by tracts of real estate, or by the balance sheet. Philosophy which connects heaven and earth like a mighty ladder, up the rungs of which the illumined of all ages have climbed into the living presence of Reality--even philosophy has become a prosaic and heterogeneous mass of conflicting notions. Its beauty, its dignity, its transcendency are no more. Like other branches of human thought, it has been made materialistic--"practical"--and its activities so directionalized that they may also contribute their part to the erection of this modern world of stone and steel.

In the ranks of the so-called learned there is rising up a new order of thinkers, which may best be termed the School of the Worldly Wise Men. After arriving at the astounding conclusion that they are the intellectual salt of the earth, these gentlemen of letters have appointed themselves the final judges of all knowledge, both human and divine. This group affirms that all mystics must have been epileptic and most of the saints neurotic! It declares God to be a fabrication of primitive superstition; the universe to be intended for no particular purpose; immortality to be a figment of the imagination; and an outstanding individuality to be but a fortuitous combination of cells! Pythagoras is asserted to have suffered from a "bean complex"; Socrates was a notorious inebriate; St. Paul was subject to fits; Paracelsus was an infamous quack, the Comte di Cagliostro a mountebank, and the Comte de St.-Germain the outstanding crook of history!