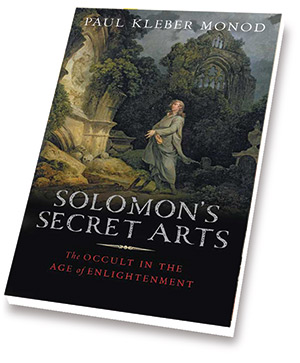 The Occult in the Age of Enlightenment

from historytoday.com: Twenty-first century Britain is a society in which the fascination with the ‘occult’ is flourishing. Paul Kléber Monod’s new book seeks to illuminate one phase of the convoluted history of this phenomenon: its fate and fortunes during the long 18th century. The period 1650-1815 is synonymous with the onward march of scientific reason and the onset of the Enlightenment. It is widely assumed that these developments consigned esoteric knowledge of the supernatural to the category of ‘superstition’ and undermined its credibility in educated circles. Solomon’s Secret Arts is a spirited challenge to this still influential narrative. It vigorously contests the view that serious intellectual interest in astrology, alchemy and ritual magic was a casualty of the rise of Newtonian science and rationalist thinking. Monod approaches the occult as ‘an old ritual garment, worked and reworked at regular intervals’, an ‘invented tradition’ that has repeatedly adapted itself to new cultural conditions. He sees it as a ‘hybrid plant’ comprised of two chief strands: a tradition of Renaissance thinking rooted in Gnosticism, Hermeticism and Neoplatonism and a set of practical techniques for accessing spiritual power.


Monod traces, through a series of biographical sketches, the continuing pursuit of prisca sapienta, the hidden, higher wisdom thought to have been possessed by Adam, Moses and Solomon. Building on existing work, he casts additional light on the involvement of Isaac Newton and Robert Boyle in the occult sciences and introduces us to a colourful cast of characters who dabbled in these arts: from the amateur Rye astrologer Samuel Jeake, the Anglican scholar of druidism William Stukeley and the Somerset exciseman John Cannon; to the magical architect John Wood of Bath, the Italian charlatan Count Cagliostro and the radical visionary poet William Blake. Along the way we are offered fresh insight into the shadowy history of Freemasonry, which established its first lodge in Britain in 1717; into mystical religious movements, such as Swedenborgianism; and into the mysterious world of animal magnetism and Mesmerism.

Monod’s analysis is alive to how occult thinking responded to a changing environment: to the growth of the publishing industry, to the evolution of party politics, to the emergence of pieties of emotion and sentiment such as Methodism, to the threat presented by the French Revolution and to the upheavals associated with early industrialisation. Examining its evolution in three phases, he posits its partial withdrawal from the public to the private realm, followed by its temporary resurgence in respectable middle-class culture in the late 18th century. Connecting the dots between the demise of the Renaissance occult tradition and the rise of 19th-century Romanticism, which represented a reaction against the rationalist project of the Enlightenment, his book is a logical consequence of revisionist trends that have refined long-standing claims about ‘the disenchantment of the world’.
Monod’s attempt to chart the shifting relationship between science, reason and the ‘occult’ is certainly suggestive, but not always wholly convincing. His assertion that ‘organised religion’ was the real nemesis of the latter, for instance, is insufficiently developed; so, too, is the argument that it was effectively stifled in Scotland by the Presbyterian establishment’s severe hostility towards anything that smacked of diabolism. Some recent work on aspects of Scottish supernaturalism, such as persisting Protestant belief in fairies, runs against the grain of Monod’s analysis here. In general the book is less precise about the nexus between esoteric knowledge and the sphere of vernacular magic and witchcraft than might be wished. The tension between the secrecy he sees as a defining feature of the occult and tendencies that pulled in the opposite direction, such as its popularisation via the commercial press, might also have repaid further attention.

More seriously, in using the ‘occult’ as his central category of analysis, Monod may be in danger of deploying an anachronism. Until the late 18th century the word was not used as a noun, but as an adjective to describe something recondite, opaque and unknown. Its closest contemporary counterpart was the term preternatural, which denoted a puzzling occurrence whose causes were hidden from external view. Surprisingly, Monod pays no attention to this concept. In speaking of the ‘occult’ he also runs the risk of exaggerating the coherence of the fluid phenomenon he studies, which he describes as eclectic, quirky, mutable and vague and as often lacking ‘the theological or ethical dimensions of a religion’. He admits he does not believe it objectively exists. Reminiscent of the perspective adopted in Keith Thomas’ celebrated Religion and the Decline of Magic (1971), Monod’s scepticism here will unsettle some readers. It sits a little oddly with his mission to lay to rest ‘a conception of the occult as the eternal bogeyman of modernity, bent on the undoing of reason and progress’. Nevertheless this thoroughly researched and interesting survey succeeds in underlining the ambivalences of the Scientific Revolution and Enlightenment in Britain. It highlights the slippery and contested character of these movements and compels us to rethink their relationship with intellectual traditions that they marginalised.

Alexandra Walsham is Professor of Modern History at the University of Cambridge and author of The Reformation of the Landscape: Religion, Identity, and Memory in Early Modern Britain and Ireland (Oxford University Press, 2012).