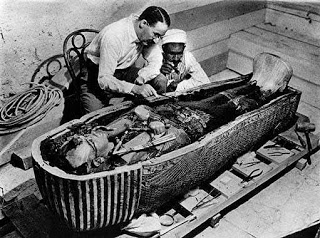 What Edith Rockefeller Can Lead To… Part 1

from Holy Hexes:
In the middle of the labyrinth that leads to the truth, an occupant can become entangled in distractions. Connecting the dots, or navigating the green hedges in order to shine light on relative unknowns, while using the internet, is a tricky and sometimes daunting task. This bit of research is going to explore some of the dots I’ve connected between elite families such as the Rockefellers and the Rothschilds, surrounding the subjects of antiquity, as well as one of the most famous archaeological discoveries in history, the excavation of King Tutankhamen’s tomb. The Middle East and Northern Africa are veritable hot spots for ‘philanthropic contributions to world history and heritage’ as some would like us to believe. The prevailing question in my head while looking into these matters was: What if these families have a stake in these ancient chambers for occult purposes, shrouded in mystery yet revealed by their footprints? If you have doubts about any of the information I am about to present, kindly click on the links provided. Every single link is quality. (with the exception of Wikipedia links. Those are there for introductory purposes.)

I’ll begin with Edith Rockefeller McCormick, the daughter of John D. Rockefeller and his wife, Laura Spelman. In February 1923, she was in the press for claiming to be the reincarnation of the wife of King Tutankhamen. She was quoted as saying, "I married King Tutankhamen when I was only sixteen years old. I was his first wife. Only the other day, while glancing through an illustrated paper, I saw a picture of a chair removed from the King's chamber. Like a flash I recognized that chair. I had sat in it many times." The Rockefeller family must have reacted to stories like this with with a collective cringe. She followed up by stating "My interest in reincarnation is of many years' standing." She was also said to be interested in astrology and to celebrate Christmas on December 15. Other information can be found here. Continue reading...

This is a very curious revelation, and I will expand on why. Information on Emile Ammann, Edith Rockefeller’s driver for seven years: "Ammann had told him several times that Mrs. McCormick's weird influence followed him all over the world and destroyed his finer sensibilities."

"He was unable to resist the hypnotic influences cast upon his life by Mrs. McCormick, Ammann told me," Dr. Gerty testified. "Though once he broke away from the so called influence and returned to his wife and children in Mauritius, an island in the Indian Ocean, the spell followed him, he said, and he returned to Switzerland, only to find that Mrs. McCormick had returned to the United States."

In court, a Dr. Max Schwendimann (executive secretary to the Swiss consul) testified on Ammann's behalf, claiming that he considered Ammann not only sane, but quite intelligent. When all was said and done, Emile Ammann was indeed declared sane, and he denied that his former employer had hypnotized him. He would return to Europe, and eventually write his book "Au Service d'une Milliardaire Américaine," which would be published in 1930.

In that book, a translated portion shows that he said:

“Nevertheless, you ordered my detention; I think to keep me muzzled. You had for you Madame, the weight of your millions. I had for me the reason and equity. I forced the door of the tomb that was going to close on me.”
And “Ruthlessly, Madame, I will tear away the mask, and if, in my book, I keep a certain reserve, is out of concern for the good man Mr. Rockefeller, your father.
You had sworn my death, sworn you would mute my life. This book shows you, Madame, that, any billionaire that is, you should never say never.”

Here is an exerpt from a book entitled “The Rockefeller Women: Dynasty of Piety, Privacy, and Service” by Clarice Stasz, Pg. 262

“According to one story, perhaps apocryphal, she (Edith Rockefeller) seemingly went into a trance and announced that she had lived previously as Seti I, the child wife of Tutankhamen. Though some snickered, enough admired Edith’s erudition that Chicago society developed a cultist element ready to study and adopt her latest interests.”

I understand these are a lot of links and sources, but bear with me. The similarities and peculiarities will continue. Young David Rockefeller, along with his mother and father also spent three months in Egypt during the winter of 1929. Why the vested interest in the fertile crescent, and why the claims of resurrection by a Rockefeller family member? Very interesting. I doubt they were drunken ramblings. Let’s examine other details:

In 1922, when Tutankhamen’s tomb was discovered, John D. Rockefeller Jr. was already an enthusiastic promoter of American Egyptology.

It was through the Oriental Institute, established in 1919 by the University of Chicago with substantial donations from John D. Rockefeller, Jr., that an Egyptologist by the name of James Henry Breasted put his plan to work. "Mrs. Rockefeller read Breasted's book Ancient Times to the children at bedtime," noted Carlotta Maher, assistant to the director of Chicago House. "That was, I believe, the beginning of a personal friendship between Rockefeller and Breasted. He gave him the support he needed." Source

Breasted's growing reputation meant that he was bound to play a role in the greatest discovery of the past century, the treasures of the pharaoh Tutankhamen, made in 1922 by English archaeologist Howard Carter. This episode rapidly became fraught, thanks to a combination of political tensions, personal jealousies and a policy of giving exclusive reporting rights to the Times of London. Here Breasted was able to exert a calming effect, and he emerged as something of a trusted go-between. Source

A ton of further information can be found here:

As found in this piece of research, the Rothschild family was heavily involved in Egypt. Egyptian finances in the nineteenth century: a Rothschild perspective.

Howard Carter, an English archaeologist and Egyptologist known for discovering the tomb of 14th-century BC pharaoh Tutankhamen, was involved with a man named Lord Carnarvon, who was an enthusiastic amateur Egyptologist undertaking in 1907 to sponsor the excavation of nobles' tombs in Thebes. Howard Carter joined him as his assistant in the excavations. In 1922, he and Howard Carter together opened the tomb of Tutankhamun in the Valley of the Kings, exposing treasures unsurpassed in the history of archaeology.

Additionally, from the Daily Beast:

"Now its current chatelaine, Lady Fiona, the Countess of Carnarvon, has penned an account of Almina Carnarvon, the enormously wealthy heiress and illegitimate daughter of Alfred de Rothschild, who, in 1895, married the fifth Earl of Carnarvon, the explorer who discovered the tomb of Tutankhamen.

Every January, Almina and her husband would go to Egypt for a month or two without their children. The children were raised in a separate section of the house than that inhabited by their parents. Almina’s son, “Porchy,” later the 6th Earl of Carnarvon, recalled in his memoirs that his parents’ visits to the nursery, usually at tea-time on Sundays, could be excruciating occasions. “There is a rather heart-breaking description of a family too awkward with each other to know what to say, the Earl blustering out questions about how the schooling was coming along, just as his father had with him. Porchy heaved a sigh of relief when the adults turned on their heels and returned to their world.”

The first national Spiritualist meeting in the U.K. was held in 1890, hoping to make contact with the spirit world and receive messages from the dead. At Highclere, séances were held in one of the upstairs guest bedrooms. “Once, Porchy and Eve witnessed a bowl of flowers levitating off the table. Eve got so nervous she reportedly had to go into a nursing home for a fortnight’s rest. At another, Howard Carter and a female guest were present, and the lady was placed in a trance in order to channel a spirit message. She began to speak in a strange voice and a language that at first no one could identify. Carter proclaimed, in a tone of amazement, ‘It’s Coptic!'”

For more proof/support that she was the illegitimate child of a Rothschild, look here, here or here.

So the moral of the story is: what were the Rockefellers and Rothschilds really up to in Egypt and why do some of those individuals claim to be the resurrected dead, or become involved in trances with the man who discovered the Tomb of Tutankhamen in order to channel a spiritual message, speaking in ancient Egyptian languages? It is strange stuff to say the least. The research continues! Part 2 coming when something else floats to the surface.